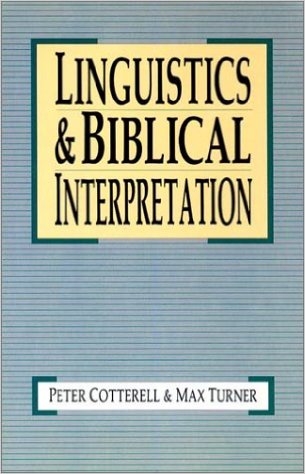 Biblical scholars are expected to have received training in humanistic disciplines of interpretation, including historical study and the study of languages based on classical philology. But until recently twentieth century linguistics has largely bypassed most of them, despite the influence of James Barr’s renowned book The Semantics of Biblical Language (London: Oxford University Press, 1961). The wide-spread ignorance of linguistics notably hinders sound exegesis.

Cotterell and Turner’s book provides an excellent remedy. The authors not only demonstrate that linguistics is supremely relevant to biblical interpretation, but also take care to provide access to the most important types of linguistic skills that can bear fruit in exegesis. They wisely concentrate on linguistic theories of meaning, involving semantics and pragmatics, because these are most serviceable for exegesis and literary study. Included are chapters on the relation of authors and texts to meaning (chapter 3), common errors in word study (chapter 4), positive approaches to word meanings (chapter 5), sentences (chapter 6), discourse (chapters 7 and 8), and nonliteral language (chapter 9). In particular, the difficult, linguistically unsettled area of discourse analysis (analysis of larger units of text as coherent wholes) has received a good share of their attention. A large number of examples are included to flesh out the principles, but an even larger sample would have been useful for people with little previous exposure to the subject.

In order to illustrate linguistic principles in action, the authors have often had to choose sides on disputed questions both in linguistics and in well-known exegetical disputes. Often their main point is that insights from linguistics can throw the balance in favor of one exegetical option, and on such points their judgment is consistently sound. On some matters of dispute they have had to choose a particular linguistic or exegetical framework almost from the beginning, but here also they have tried to stay in the mainstream and have avoided eccentricities.

The authors are well-informed in both linguistics and biblical interpretation, but they do not presuppose any knowledge of linguistics on the part of their readers. Readers with no previous exposure to linguistics will find some parts heavy reading, but nevertheless rewarding. The book is clearly written and reasonably self-contained, but also offers further resources through numerous bibliographical references.

This book meets an important need in the field of biblical interpretation. Some excellent books already exist on the lexicology of biblical languages, but until now nothing that introduces the full range of linguistic topics most relevant for exegesis. This book should therefore be regarded virtually as required reading for biblical scholars.

Moreover, the ideas of the book are valuable to a much broader audience. Though almost all the important examples are taken from the Bible, the principles are relevant for the entire field of literary interpretation.