The Works of John Frame & Vern Poythress
This article originally appeared on Books at a Glance. Used by permission. 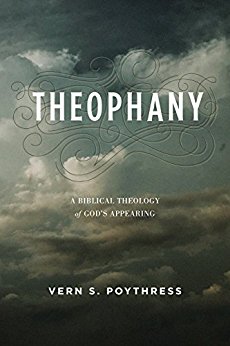 Every Bible reader notices those occasional moments in biblical history when God suddenly makes an appearance, but few have thought through the significance of all this more than Vern Poythress. Below is our recent interview with Dr. Poythress about his new Theophany: A Biblical Theology of God’s Appearing.

Fred Zaspel:
What is a theophany? And what is your book all about? What is the contribution you hope to make?

The appearances of God in the Old Testament foreshadow and anticipate the climactic way in which God comes to us when Christ comes. Christ is the final appearance of God, as he says strikingly to Philip: “Whoever has seen me has seen the Father” (John 14:9).

My book focuses on the theme of theophany throughout the Bible. It focuses especially on the outstanding cases when God appears to people in spectacular visual displays (for example, Isa. 6; Ezek. 1; Dan. 7:9-10; Jesus’ appearance to Paul in Acts 9:3-7; and Jesus’ appearance to John in Rev. 1:12-16). But these special appearances have ties with the broader theme of God’s presence with his people. Theophanies are often the prelude to an enduring presence of God. God who presents himself in theophany is the same God who continues to be with his people when the theophany is over.

I hope that through a study of theophanies people can grow in appreciating the glory of God in Christ, and the meaning of the indwelling of the Holy Spirit, who brings the presence of God to his people. All the theophanies in the Bible contribute to this goal. Every Christian believer is involved in these accounts, because they show us the same God who has come to us in Christ, and who now dwells within us through the Holy Spirit. As we grow in knowing Christ, we are transformed into his likeness, “from one degree of glory to another” (2 Cor. 3:18). We thereby take on characteristics that reflect theophany on our human level.

Poythress:
As far as we know from the biblical record, the intense manifestations of God were not common. Yet more instances are mentioned in the Old and New Testaments than most people realize. And we are meant not to pass quickly by them, but to appreciate how God reveals himself in majesty, and how he is the same God who continues to be present with his people through his Word and his Spirit.

Zaspel:
We can assume that God appeared to people in biblical times in order to make himself known. Just what is it about God that we learn from these theophanies?

Poythress:
God reveals himself as God – in his majesty, his power, his wisdom, his mercy, his eternality. The list goes on. In one instance of theophany, in Ex. 34, God gives Moses an extended description of what he is like (verses 6-7). In other instances, the visual display symbolizes what God is like. Isaiah’s vision of God on his throne in Isa. 6:1-7 shows his power by the symbolism of his throne. It shows his holiness through the awesome character of the vision and through the words of the seraphim, “Holy, holy, holy ….” It shows his mercy through the forgiveness and purification extended to Isaiah (verses 6-7).

Zaspel:
What are some themes commonly associated with theophanies?

Poythress:
Among the common themes are the majesty of God, the righteous judgment of God, and his mercy extended to sinners. Theophanies reinforce what happens in God’s covenants (promise and fulfillment), in God’s kingly rule, and in God’s purpose of being presence with his people.

Zaspel:
How do theophanies inform the Bible story line?

Poythress:
The culmination of history, in the new heaven and the new earth, is a theophany. God and the Lamb appear on the throne, and his servants “will see his face” (Rev. 22:1, 4). The glory of God and of the Lamb fill the new world (Rev. 21:22-24). This culmination is what every Christian should look forward to. It should animate and encourage us every day. The beginning of history included a special presence of the Holy Spirit in Gen. 1:2, “hovering over the face of the waters.” The midpoint of history is in the work of Christ, who is “God with us,” “Immanuel” (Matt. 1:23). The presence of God, which is the broader form of the theme of theophany, runs all the way through the Bible.

Zaspel:
Can you give us just a brief overview of your book so we can know what to expect?

Poythress:
The book has four parts (plus some appendices). Part I explains what a theophany is, and how the Old Testament theophanies point forward to Christ. It also looks at different kinds of theophany, with a chapter each on thunderstorm theophanies, fire, cloud, glory, God’s court (with angels), man-like appearances, warrior appearances, chariots, and still others (many of which are not specifically identified by more details). There is also a chapter on how the created world reflects and displays the glory of God in a way that is reminiscent of theophany.

Part II explores the mystery of theophanies, including the trinitarian basis for theophany, the distinct role of the three persons of the Trinity, and reflections of theophany in the book of Revelation and in the created world. It also explores how the dynamic process of theophany is reflected more broadly in God’s work in the world and in us.

Part III is a survey of theophanies occurring in the individual books of the Old Testament. It goes mostly in chronological order, but it treats the prophets separately and the other poetical books separately (Job to Song of Solomon). Part IV does the same thing for the New Testament. One of the purposes here is to show just how extensive the theme of theophany is, and to encourage readers to link many specific passages in the Bible to the overall theme.