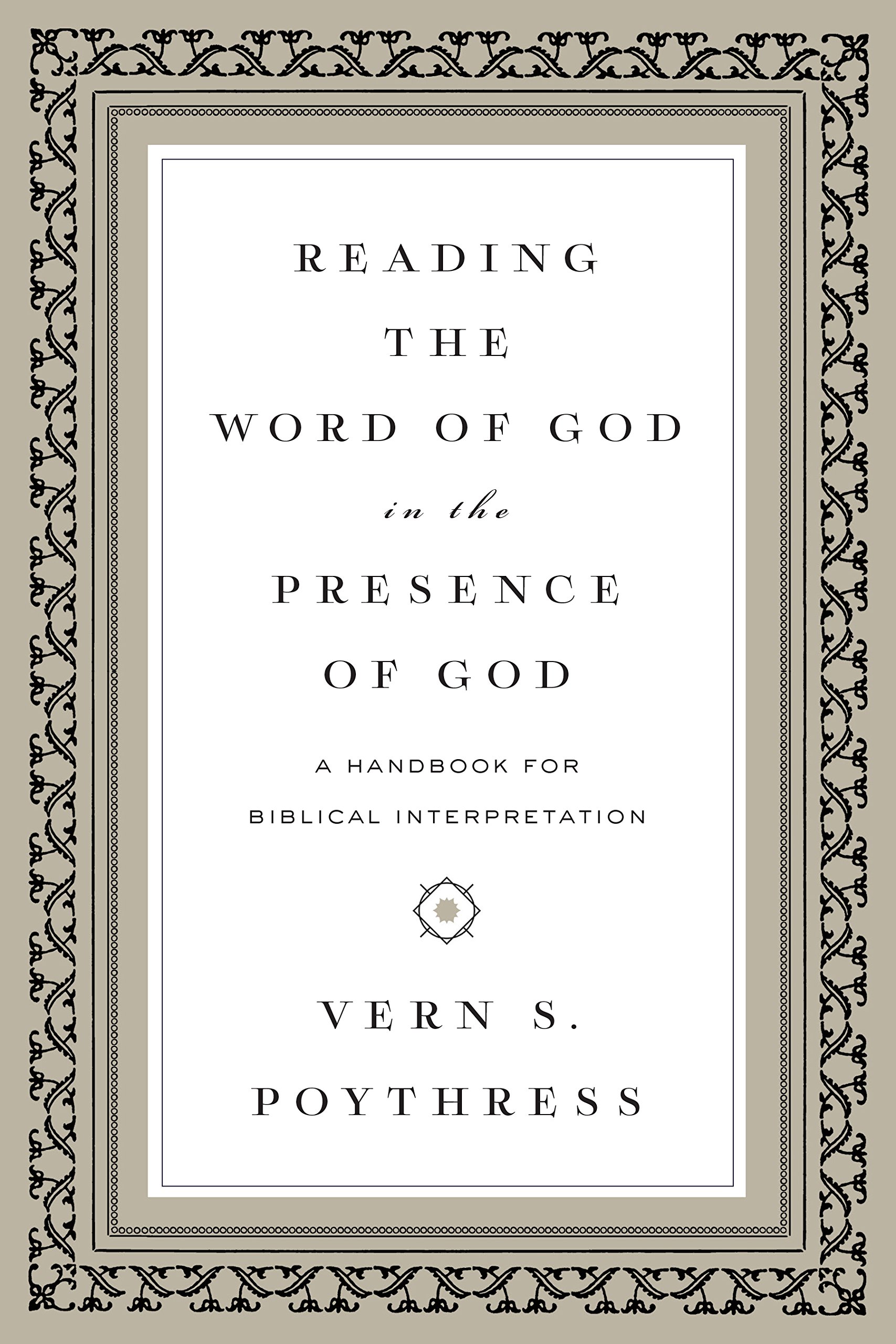 The following is an interview that originally appeared at Books At a Glance; it is used here by permission. 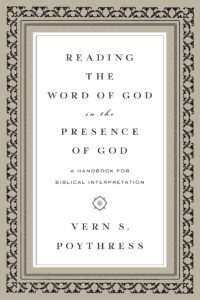 Vern Poythress is a prolific author whose works we have gladly featured here on Books At a Glance on several occasions. Once again he leaves us in his debt with an outstanding new textbook for interpreting Scripture. We welcome him back with us, this time to talk about his new Reading the Word of God in the Presence of God.

Books At a Glance (Fred Zaspel):

There are of course other books designed to help us interpret the Bible more carefully and accurately – what is the contribution you hope to make in your new book? And perhaps you could explain why you have title this book as you have, Reading the Word of God in the Presence of God.

In this book I wanted to emphasize three principles that played a significant role in biblical interpretation until the time of the Reformation, but have come to be more marginalized in scholarly circles, with the influence of the Enlightenment and academic specialization.

The first principle is the most important: we are to read and study the Bible in the presence of God. God is speaking. We are supposed to be like Samuel, whom Eli advised to say, “Speak, Lord, for your servant hears” (1 Sam. 3:9). This principle should be practiced all the way through the interpretive process—not just at the end or the beginning, but also in all the more technical aspects of interpretation.

That leads me to the second principle, the principle of religious antithesis. Those who believe in Christ live and think and act according to the power of the Spirit of Christ and the renewed direction of their regenerate hearts. Their religious direction is antithetical to the direction of those who do not trust in Christ. This religious antithesis has effects that propagate through all of life, including the life of the mind.

Sometimes the differences are obvious. We believe in God the great king, who works miracles when he chooses. Western unbelievers are typically skeptical about anything in the Bible that seems miraculous. At other times, the differences are more subtle. We should have distinctive views about language and society and human nature, based on what God tells us in the Bible. For example, we should believe that language is a gift from God, and that God is the original speaker (John 1:1; Gen. 1:3). We should believe that God is present in every society and controls it, rather than cultures being autonomous human constructs. These beliefs differ from those of unbelievers, because God’s presence makes a difference.

If there are differences in what we think we are studying, there will also be corresponding differences in how we study—the methods that we use. At a deep level, there are no “common” methods, allegedly neutral methods shared by believer and unbeliever without any difference. In every aspect in interpreting the Bible, we should be proceeding differently from unbelievers.

The third principle is the principle that interpreting the Bible involves our response to it as whole persons. In practice, interpretation cannot be neatly separated into tightly controlled steps, each of which does only one thing, independent of the rest and independent of a larger environment of knowledge and influence. Lexical analysis, grammatical analysis, research on historical and cultural background, and similar kinds of analysis all interlock.

And each of these interlock with our meditation on the content of Scripture. The different kinds of analysis have distinct foci, but they focus on one aspect against the background of all the others, which are still present. So my book is about perspectives on interpretation, rather than steps that can be treated as independent of each other.

Who is your intended audience?

I am writing especially for seminary students and pastors, who regularly engage in interpreting the Bible and want to refine their skills and their thinking. But I have tried to write so that even a young Christian can improve his ability to study the Bible. At an early point the book introduces a simple, three-step process than any Christian can use in studying a passage in the Bible. The three steps are observation, elucidation, and application. The idea of these three steps did not originate with me. But in accordance with my principles, I show how these steps are three perspectives on the entire process of study.

From this simple starting point I expand to explain ways to enrich the three steps. A Christian for whom this is all new can go only as far as he needs to.

All evangelical Christians, at least, want to acknowledge the dual authorship of Scripture. In just broad terms, how ought this to shape our thinking as we read the Bible?

You are right about dual authorship. But the situation is more challenging because the two authors, divine and human, do not just sit side by side, without interaction. The Holy Spirit as divine author empowers the human authors, so that they desire to express whatever it is that God intends to express through the words that are genuinely their words (as 2 Pet. 1:21 in context implies). If we ignore the presence of God in and with the human authors, we are also ignoring what the human authors themselves desire, and we falsify not only divine meaning but human meaning. At this point, the ordinary believer, who tends to focus on God’s meaning, is actually closer to the truth than many scholars, who ignore the divine author for the sake of having a controlled scholarly method.

What is the role of Christian piety in biblical interpretation? How does the one affect the other?

True piety is not in tension with mental and intellectual vigor and depth. God created the human mind in all its dimensions, and he intended that we should love him with all our mind (Matt. 22:37). But the Scripture also teaches that we need to “be transformed by the renewal of your mind” (Rom. 12:2). Intellectually responsible interpretation of the Bible includes all the dimensions of piety, because we need to know God personally. Only by knowing the God who expresses his meanings in the Bible, do we accurately understand what he means. And God intends that his word should be applied. We need to receive what he says as servants who are submissive to his word and obey it. Obedience is an indispensable aspect of biblical interpretation.

Can you give us a broad overview of your approach and the topics you address?

Then the book introduces a simple, three-step method that any Christian can use to dig more deeply. The three steps are observation, elucidation, and application. The rest of the book expands on these three steps, again and again. As I indicated in an earlier answer, the three steps are three perspectives on the whole process, rather than being isolated steps. But it helps to have all three, so that we notice more and more about the passage we are studying.

Then the book looks at specific issues. We look at history and the transmission of God’s message through time, as well as issues of authorship and issues of language. Then comes a big section on “redemptive-historical interpretation.” The final section of the book assesses where we have been and how redemptive-historical interpretation compares to some other approaches.

The book also includes examples, to flesh out the principles. I include worked-out examples in which I interpret some sample verses from each of several kinds of text: historical material (1 Samuel), Proverbs, Psalms, and a prophetic book (Amos). These examples together show how the principles can work with different kinds of communication within the Old Testament.

Finally, there are some appendices. These focus primarily on the differences between my approach and what has become customary among scholars in our time. The topics are (1) scholarly evangelical interpretation, (2) secular views of meaning, (3) interpretation of secular literature, (4) critical methods, and (5) philosophical hermeneutics.

Some of the terminology we use in interpreting the Bible may be new to some of our readers. Is there a brief way to explain what we mean by “Redemptive-Historical” interpretation?

The expression “redemptive-historical interpretation” is a label for a way of approaching the Bible that focuses on God’s plan for history. God works out his plan as he accomplishes the redemption of his people and ultimately the renewal of the whole world in the new heaven and the new earth. The center of redemption is found in Christ and in his work—his earthly life, earthly ministry, crucifixion, death, resurrection, ascension, and reign in heaven (Luke 24:25-27, 44-49). All of the Bible is organized around this center. So learning how to view the progress of history, the progress of revelation, and the progress of redemption in a Christ-centered way is one of the biggest challenges in biblical interpretation. That is why the book has a major section devoted to responding to the challenge.

And what do we mean when we say we should read and understand the Bible in a “Christocentric” way?

In Luke 24:25-27, 44-49, Jesus indicates that the whole of the Old Testament is about his suffering and glory and the subsequent spread of the gospel to the nations (verse 47). The Old Testament anticipates the coming of Christ, prophesies his coming, and contains many types and shadows that depict his work beforehand. It is also a time when people actually experience salvation and communion with God.

These blessings are possible only because Christ is already present in the Old Testament as the Son of God, the second person of the Trinity. He conveys the benefits of the work that he will accomplish in the future. It is therefore important that we actually appreciate the Old Testament for what it is, a Christ-centered record and testimony, intrinsically linked to the New Testament. My own book tries to help people grow in this appreciation.

In addition, it goes without saying that the New Testament is also about Christ. But that is more obvious, because it is written looking backward at the redemption that Christ has already accomplished.

This Christ-centered character of the Bible harmonizes with the fact that the Bible is also about God—the Trinitarian God who is the Father, the Son, and the Holy Spirit. Christ is obviously in focus when we think of the accomplishment of redemption. He is sent by the Father and empowered by the Spirit, and through his work of atonement provides the permanent basis for the forgiveness of sins, and our adoption, justification, sanctification, and glorification. All the benefits of salvation are gifts from the Father in the Son through the Holy Spirit. The whole Bible harmonizes as the word of God explaining the work of God in the history of redemption. And this redemption comes to its climax in the work of Christ.